THE HISTORY OF THE SITE

The history of the Réfectoire des Cordeliers is closely linked to that of the old convent and of the people who used the site over the years.

The brotherhood of the Franciscans (so named after Saint Francis of Assisi) appeared in the 13th century. Its members are also known as the Cordeliers because of the thick rope (or corde, in French) with which they used to fasten their robes. They gave their name to the conventual ensemble they would inhabit for several centuries.

A major venue of Parisian education for 6 centuries

Under orders from King Louis IX, the Saint-Germain-des-Prés abbey loaned an old vineyard to the Corderliers, so that the latter could erect dwellings and places of worship. Construction of the Réfectoire des Cordeliers started in the 13th century and ended in 1506; as for the convent it was completed in 1571.

The Cordeliers built a convent, two cloisters and a church, as well as several gardens. Today, the Réfectoire stands as the sole tangible vestige of this ensemble, which was one of the most important religious, intellectual and political centers in Paris between the 14th and the 17th century. Along with the Sorbonne, the Cordeliers’ convent was considered an unimpeachable reference in matters of theology and philosophical studies. 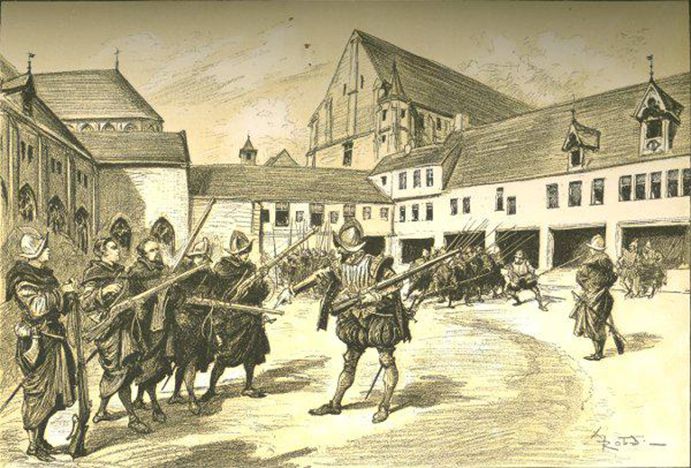 More than a century of construction to build the Réfectoire

An early refectory was built in the 13th century, along with the first buildings, but it had to be demolished in 1358 because of the reconstruction of the city’s ramparts, erected by Philippe Auguste. Construction of the Réfectoire as we know it thus started in the second half of the 14th century, and ended in 1506 with some finishing touches: the portal, the windows of the building’s upper part and the west-facing gable.

The religious community of the Franciscans grew throughout the 15th and 16th centuries, but a major fire damaged the cloister and the church in 1580. The church was rebuilt between 1582 and 1606, and the Cordeliers’ new cloister would not emerge until 1683.

The Cordeliers exerted great influence over education in Paris and over the city’s spiritual life thanks to the support of the French monarchy and of the Holy See. The Franciscan teaching system was indeed highly regarded by the political and religious elites. 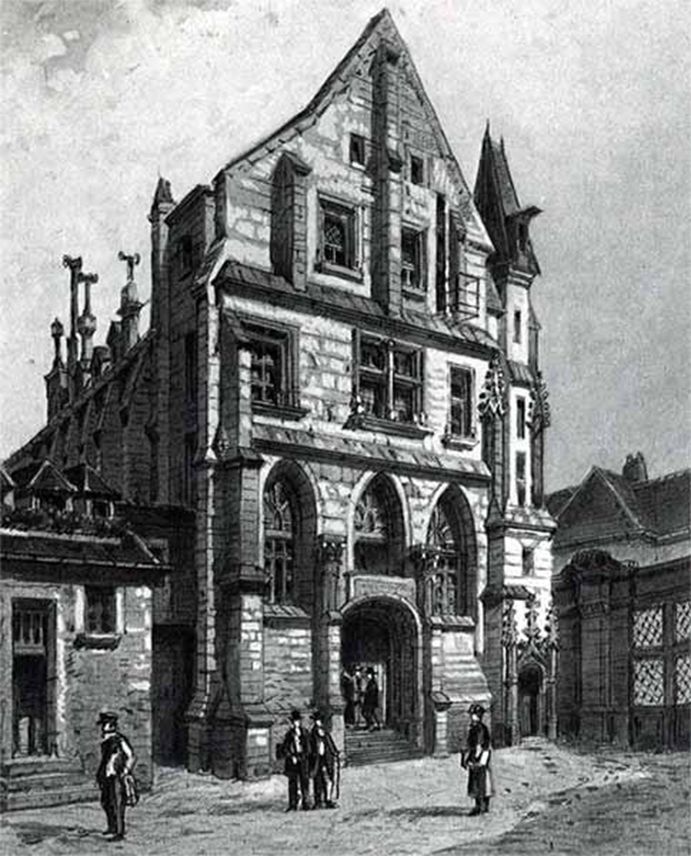 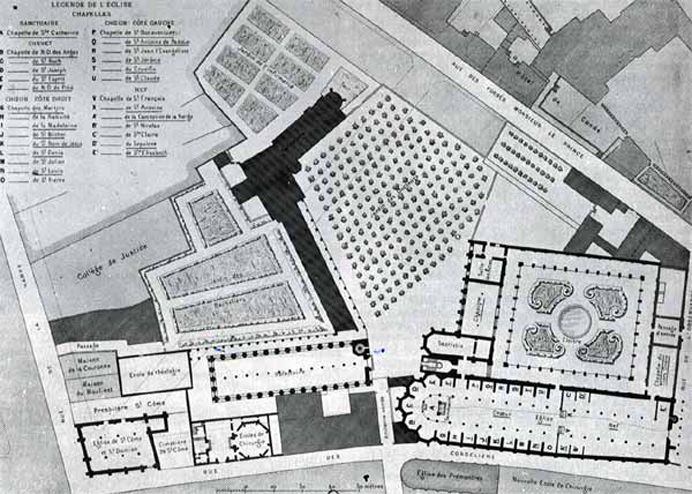 From the Middle Ages to the end of the 18th century, the Réfectoire was put to several different uses. From a mere refectory and dormitory for Franciscan monks and students, the building and part of the monastery also housed the Royal Library from 1603 onwards (holding nearly 5,000 references) as well as the archives of the Chambre des Comptes (the national accounting office).

The 18th century: the Cordeliers’ decline

The Cordeliers carried on in relatively stable fashion until the mid-18th century.
In spite of their renown, upkeep of the convent required major investments in terms of both financial and human resources. Faced with dwindling membership and financial hardships, the Cordeliers decided to partition the Réfectoire and rent out some of the space to a number of shops. From 1761 onwards, the Réfectoire was thus split, part of it remaining devoted to its traditional use, and the rest being set aside for the city’s merchants.

Dwindling attendance at the seminars and shrinking membership in the brotherhood led to various projects aimed at thoroughly replacing the convent.

In 1779 for instance, finance minister Jacques Necker sought to expropriate the Franciscans so as to turn the cloister into a new prison, and give the Réfectoire to the Chambre des Comptes to serve as its archival space.

Following the Cordeliers’ protests, in 1783 King Louis XVI decided to confirm their ownership of the church, of the cloister and of the Réfectoire.

Beside this last-minute rescue by the King, 1783 was also a significant year for the convent as this was when work started on the great Paris map featured in the building. Commissioned by the King, the map was completed by Edmée Verniquet’s team in 1790. 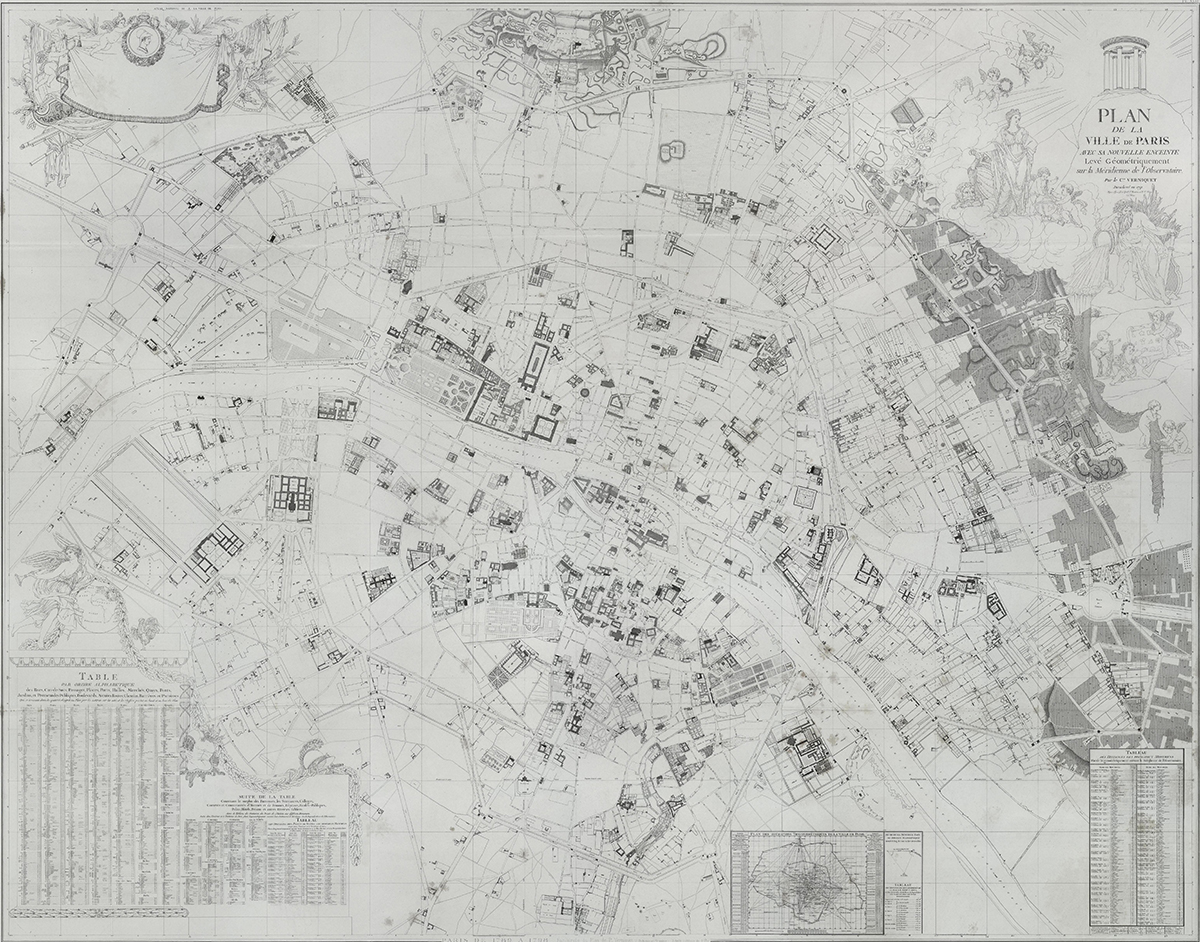 The French Revolution and the political agitation of the 1790s would definitively sound the death knell of the Cordeliers’ presence in the Réfectoire, and more generally of the convent’s very existence. The Franciscans who had inhabited this complex for several centuries were succeeded by the members of the Société des Droits de l’Homme et du Citoyen, better known as the Club des Cordeliers.
From April 1790 onwards and for the next five years, this club occupied the Réfectoire’s premises, headed by several major figures of French history: Danton, Marat, Hébert, Camille Desmoulins and Choderlos de Laclos. The Club des Cordeliers was one of the most active clubs during the revolutionary insurrections. Its audience was largely working-class, and its members were also the first to call for the destitution of Louis XVI after his arrest in Varennes. 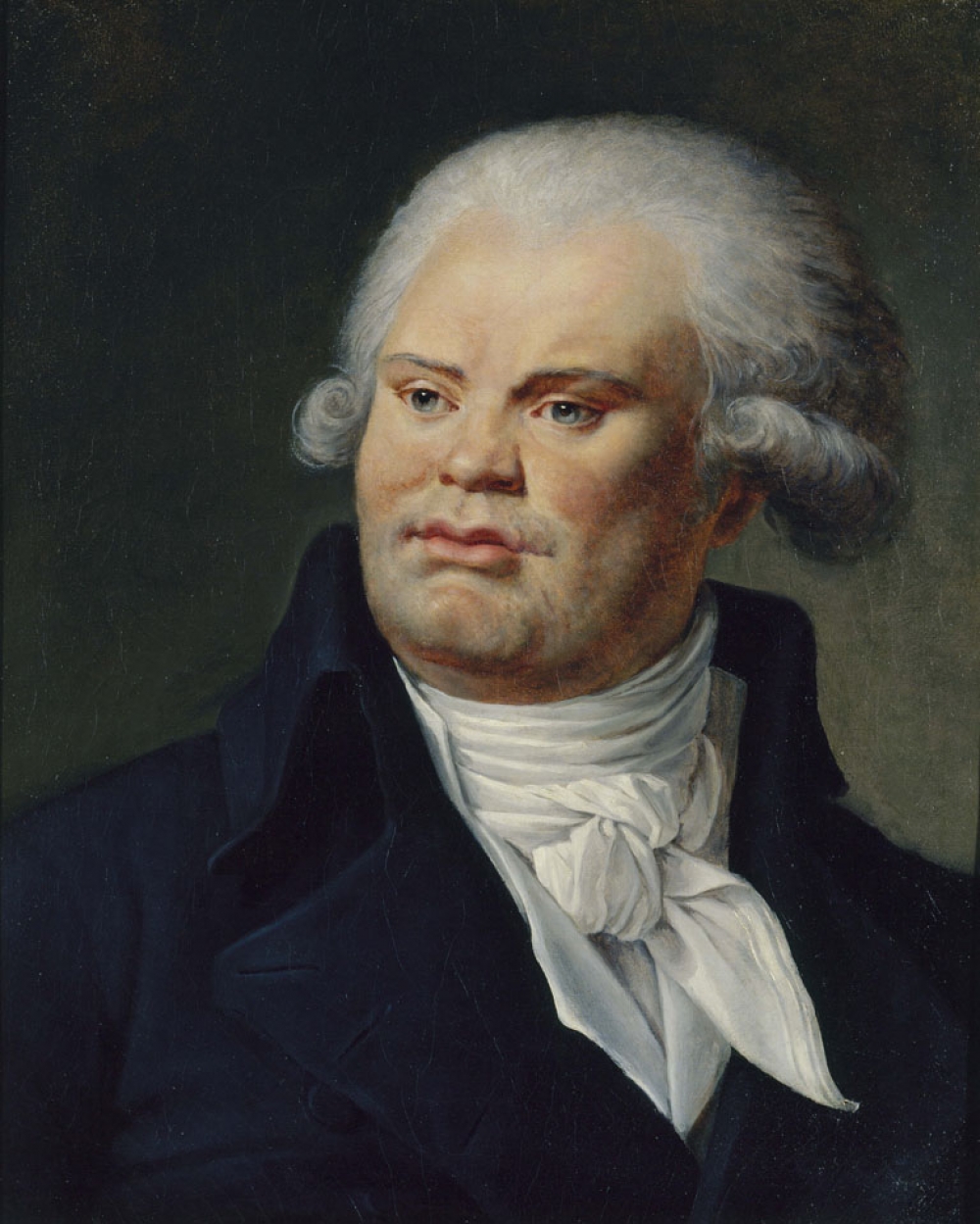 The club experienced a revival in August 1792 during the popular uprising which put an end to the monarchy in France, but the years 1794 and 1795 were marked by the decline and ultimate disappearance of this historical club from the French Revolution.

In 1790, all of the Cordeliers’ convents were shuttered. This decision marked the beginning of a new era for the Réfectoire, which nevertheless retained the name of the brotherhood. 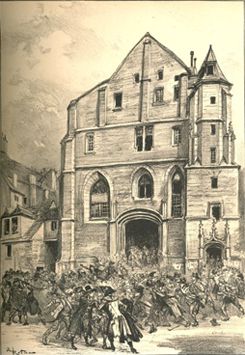 The 19th century: the Réfectoire’s renewal

Several structural changes were to affect the Réfectoire at the turn of the 19th century. One decision in particular would radically alter the contours of the Cordeliers’ site. In 1795, the State decided to install the “health school” of Paris on the site of the old convent. The Réfectoire was to house the anatomy and surgery classes. This ordinance definitively granted the Cordeliers’ premises to the School of Medicine. 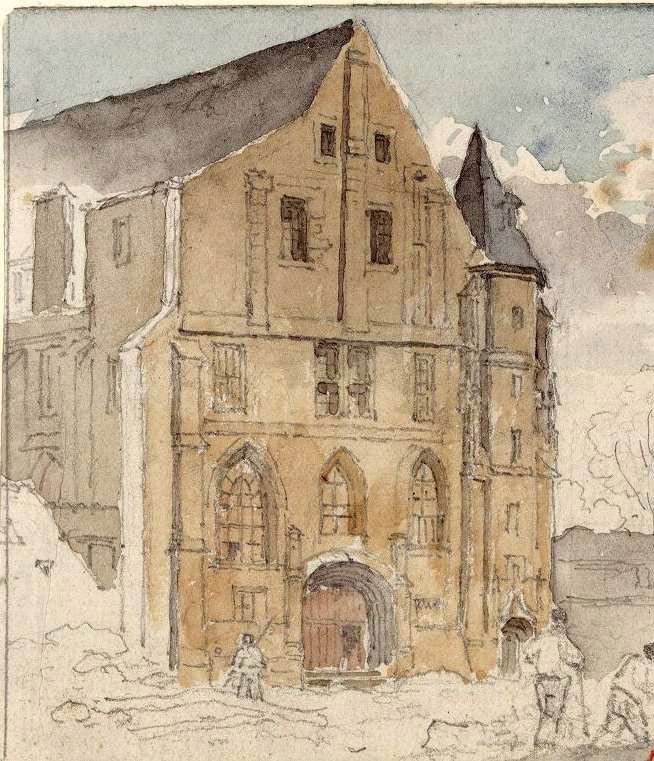 Furthermore, almost all of the convent’s buildings were to be destroyed in the late 19th century: the Réfectoire and part of the cloister would be the only ones to endure until today. Starting in 1806, a series of renovations were also implemented in the Réfectoire. Despite the 1795 ordinance, a number of rearrangements were planned to house within the building a number of organizations and personalities from outside the field of medicine and health.

In 1805, the Réfectoire des Cordeliers was converted to house the workshops of Mr. Merklein, which manufactured the notes, stamps and seals of the National Bank. The rest of the Réfectoire was used by Francesco Belloni and the students of the Mosaic School.

Finally, the baron Jean-Baptiste Regnault rented the attics, in which he set up his lodgings and his painting workshop. 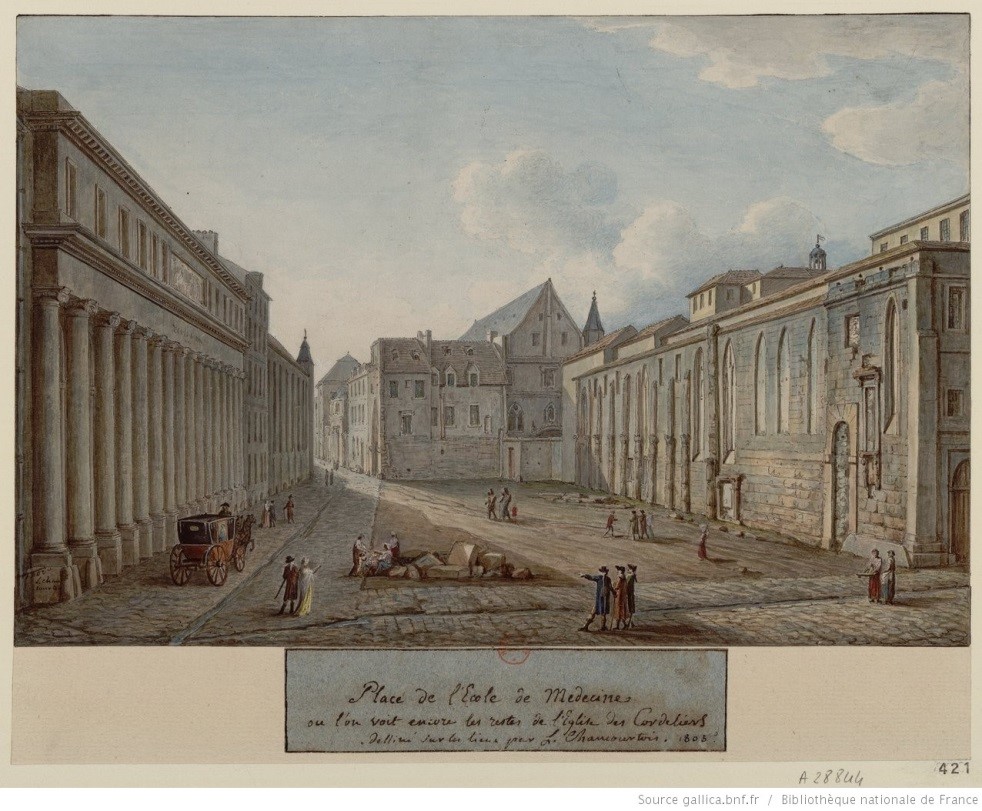 The Réfectoire des Cordeliers in 1881.

In 1826, following repeated demands by the dean of the School of Medicine to have the workshops removed, it was decided that the Réfectoire would also house the École mutuelle and the École pratique de médecine.

1835 marked the arrival of the Dupuytren museum – the city’s museum of pathological anatomy. The restoration and conversion work were notably supervised by architect Alphonse de Gisors.

The site’s medical vocation was definitively sealed in 1875 with the decision by the City of Paris to grant the grounds and buildings to the School of Medicine in perpetuity. The following year witnessed the destruction of the buildings recently erected by Alphonse de Gisors. New, more spacious buildings were erected on the site of the cloister to make way for the arrival of the Applied School of Anthropology. A library and a gallery housing 10,000 exhibits of anatomy and morphology also found their way into the Réfectoire.

The 20th century: the preservation of the Réfectoire des Cordeliers

After the work done in the 1870s, no further conversion would be undertaken in the Réfectoire. During the interwar period, the Réfectoire had to be rehabilitated, because very little care had been devoted to its upkeep. Between 1929 and 1935, a restoration campaign was launched to renovate – among other things – the roofing and the 19th century skylights, as well as remove the chimney stacks. The Dupuytren museum was also closed in 1939.

In spite of long-running debates over the option of tearing down the Réfectoire, in the end it was decided to add the site to the national registry of Historic Monuments in 1975. Following an earlier addition to that registry in 1905, this decision definitively rescued this great building from being torn down – thus ensuring its status as the one and only vestige of the Cordeliers’ old convent.

The Réfectoire would not be the subject of another restoration campaign until 1985, with – among other things – the tearing down of an internal load-bearing wall erected in 1806 as part of the building’s conversion.

The ongoing rehabilitation campaign, launched in late 2015, will have the Réfectoire des Cordeliers experience the most extensive renovation work in its history. This showcasing of the Réfectoire will enable the creation of 39 housing units for scholars by the second semester of 2018; it will also allow for the full-scale renovation of an 18th-century welcome pavilion.